The farmers of Permata Gayo were ready to produce their highest-quality coffee ever.  By November, the bright white coffee flowers had transformed into budding green fruits, and the limbs of their coffee trees were swollen with promise.  A new processing facility was ready to receive ripe, red cherries that would turn into export-grade green coffee.

Then the rains came.  And they stayed longer than normal.   The sun that was needed to ripen coffee cherries and bring sweetness to the seed inside, was scarce this season.

As a result, Permata Gayo is anticipating a 25-30 percent drop in yield from last year’s coffee harvest.  But they are the lucky ones, according to Florent Gout, a green coffee buyer with Cooperative Coffees. “From an island perspective, they say that the loss is about 50 percent,” Florent said of the coffee harvest in Sumatra, Indonesia, one of coffee’s most popular origins.

Indonesia is the fourth largest coffee-producing country in the world, behind Brazil, Vietnam, and Colombia.  Despite the effects of climate change, this year the country is expected to produce about 10.8 million bags of green coffee or about 1.4 billion pounds, according to the USDA Foreign Agricultural Service.

Only 15 percent of that coffee is specialty-grade Arabica- the type used in specialty coffee shops because of its sweet flavors and higher acidities.  And nearly 80 percent of Indonesia’s Arabica production takes place in the northern part of the island of Sumatra, where Permata Gayo farmers live and work.

Cupping workshops like the one pictured here helped Permata Gayo’s leadership make the decision to build its own post-harvest coffee processing facility.

Sumatra’s coffee has long been popularized under such names such as Mandailing or Mandheling, Aceh coffee, Toraja coffee and even the infamous kopi luwak, which are coffee beans that have been harvested from the excrement of the cat-like palm civet (whose digestive system imparts an “earthy” flavor to coffee).

Despite a reliable full-body, flavor profiles from Sumatran coffees have been somewhat inconsistent over the years.  Sometimes bright acidities would shine through.  Other times notes of green pepper, red fruits and woodiness would predominate, even though the coffee was harvested from the same region and from the same farmer groups.

But Permata Gayo is changing that.  A group of some 2,000 indigenous Gayo farmers, each working on about 2-4 acres of land, hand-pick thousands of pounds of fair-trade, certified-organic Arabica coffee every year.  The group started in 2006 when 50 local farmers met to rebuild their lives after years of civil war and the 2004 Indian Ocean Tsunami devastated their villages.

In the past five years, Permata Gayo has teamed up with Cooperative Coffees’ Florent Gout and Coop Coffees’ member Derek de la Paz of Peace Coffee, to change its coffee processing procedures to consistently produce a better-quality coffee.

“It’s really a new era in the cooperative’s history,” says Florent, who organized three cupping workshops over three years for Permata Gayo’s farmer members and leaders.  “The idea was to convince the members of Permata Gayo that processing was important to quality,” said Florent, who is also a licensed Q-grader, a professional coffee taster that is often likened to the “sommeliers” of the wine world.

Prior to having that facility, farmers sold their coffees to a village-level collector, a local entrepreneur independent of the cooperative, who would remove the fruit surrounding the coffee seed, then dry it, selling the pergamino (coffee seed/bean with a layer of parchment) back to the cooperative.

The collector-role might take the shape of a middleman or “coyote” in other countries, but in Sumatra, Florent explains, the collector is an integral part of the coffee supply chain. “He works with the co-op and really has the best interest of his village in mind,” he said, explaining that an elected co-op representative also works alongside collectors in every community.

This year, even with a decline in yield, both village-level collectors and the new co-op facility will process coffee.  The new facility will keep coffee drying consistent during an unseasonably wet harvest season.

“This is one of the reasons the co-op built the facility,” said Florent.  “We noticed how climate change was impacting coffee five years ago, and it was getting difficult to dry coffee consistently.”

“Sales and quality are increasing every year and the public interest to join cooperatives is very high,” said Djumhur Abubakar, who works with Permata Gayo.

Permata Gayo’s success even helped spin-off an all-female coffee cooperative, Koko We Gayo, which has 428 members who will also use the new processing facility to export coffee this year. 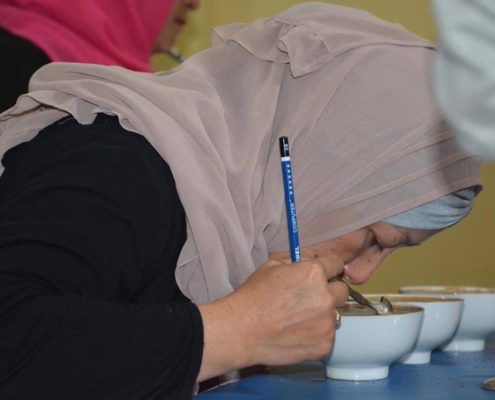 Rizkini notes coffee aromas during a cupping in northern Sumatra. Rizkini is the former quality control manager for Permata Gayo and is now the president of the newly formed Koko Wa Gayo all-female coffee cooperative.

But coffee remains the primary source of income for many of Permata Gayo’s members, so the cooperative is looking at ways farmers might diversify their incomes through other crops like avocados, said Florent.

In the end, both coffee farmers and consumers will have to adapt to the effects of an ever-changing climate.  Increased quality and scarcity will likely mean Sumatran coffee prices will increase. But the coffee drinkers who have come to love the syrupy body Sumatrans provide in their morning cup might not mind.

The Most Organic Coffee Grown Today: Under The Shade In Honduras
Scroll to top